The Kafka TA acts as a FIXEdge plugin and establishes a connection to a Kafka single instance or a Kafka cluster. The adapter supports TLS connectivity.

The Kafka TA transfers FIX messages in raw or serialized formats from the FIXEdge Server to the Kafka platform and vice versa.

Kafka TA performance is close to Kafka's native speed of processing. The average FIX messages reading/writing per second is 30,000 or higher. This number refers to the overall throughput capacity for the FIXEdge server with the Kafka TA (from FIX session to Kafka server).

Multiple instances of the Kafka TA can be configured using one library instance, inside one instance of FIXEdge.

FIFO (First In First Out) ordering is guaranteed, meaning that the order in which messages were sent and received will be maintained upon the termination of the server instance.

The Kafka TA is intended to communicate FIX messages to other applications using the Kafka streaming platform as middleware.

The Kafka TA allows integration with Kafka via Consumer/Producer API. FIXEdge clients, configured either as producers or consumers, push and pull messages to/from brokers housed in Kafka that organize and store messages according to topics. Brokers commit messages to disk storage for a customizable period of time or space, configurable according to the topic. Topics are further broken down into partitions, with each partition acting as a separate commit log. A broker administrator keeps track of consumers reading partitions by assigning offsets, thereby providing guaranteed-ordering. These features facilitate easy scaling and event replay, as well as the building of fault-tolerant systems.

The Kafka TA differentiates from other Transport Adapters in providing custom serialization/deserialization and durable message storage.

The schema below represents an interaction between FIXEdge and a customer's infrastructure via the Kafka solution. 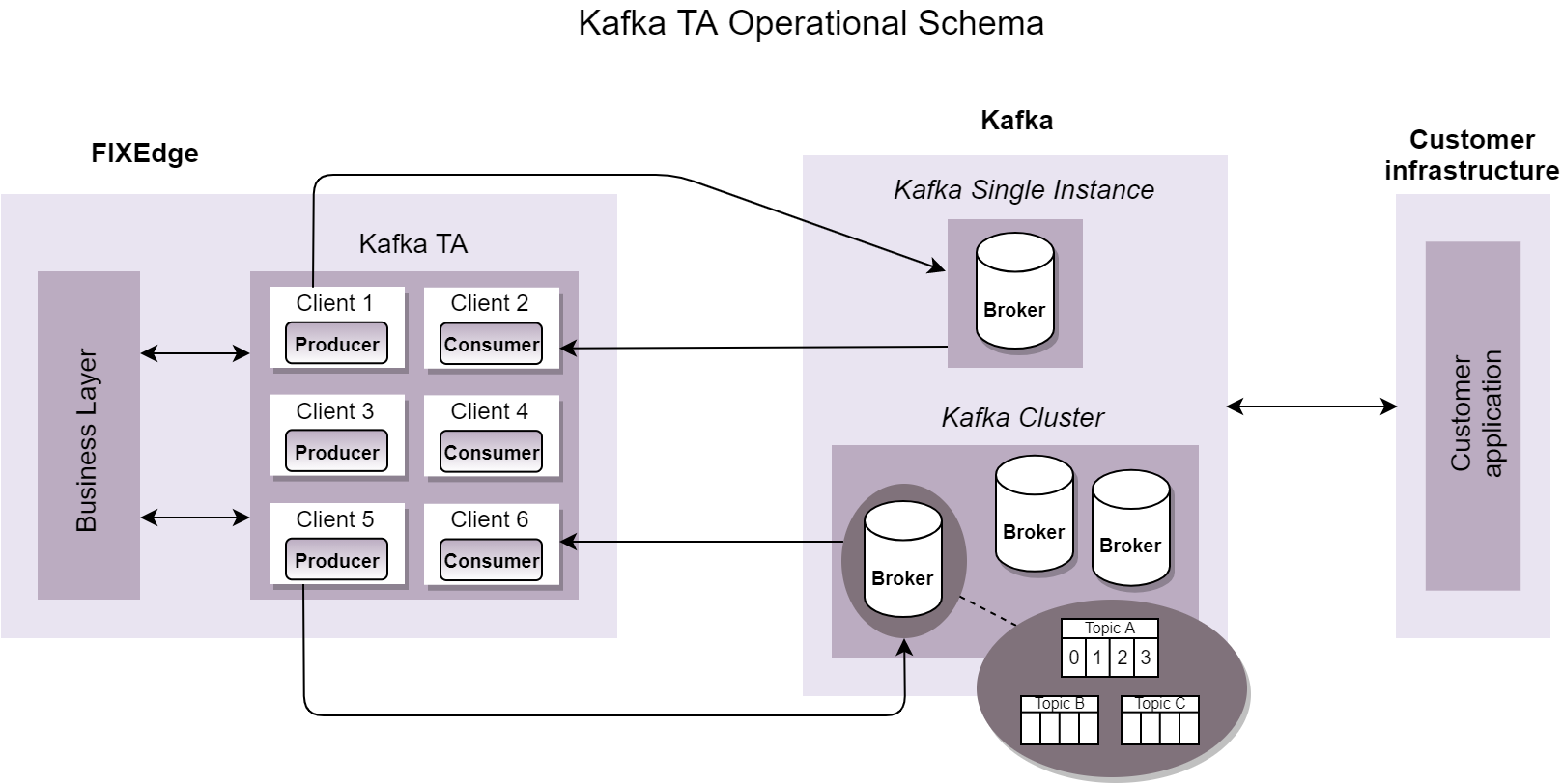 The connectivity mechanism preserves FIX messages even if critical situations occur, such as:

The Kafka TA provides an at least once delivery guarantee, (as opposed to only once). This means that messages are guaranteed to be delivered at least once, with the possibility of duplicates.

Kafka TA persistent FIX messages in text format are stored as a file saved to a disk using memory mapping.

Storage is unlimited but should not exceed disk capacity.

All messages passing through the system are kept in the persistent message storage and are not cleaned up automatically.

Committing to the Kafka platform

The TransportLayer.KafkaTA.<Session>.Consumer.Commit parameter provides three strategies that dictate how commit messages (acknowledgements of messages received) are sent to the Kafka platform.

The table below summarizes the best strategies for prioritizing speed and/or reliability in descending order.

The three strategies are described in more detail in the table below.

Given that FIXEdge has already been installed in the user's environment, use the following steps to step up the Kafka TA

Multiple instances of the Kafka TA can be used during one library instance, inside one instance of FIXEdge.

In the above example, there 2 separated instances of Kafka adapters:  "Kafka1" and "Kafka2". Session names are unique across all Kafka adapters

Connection to the Kafka platform can be established when the Kafka TA is properly configured with the Kafka IP address.

The samples below represent the Kafka TA's configuration with the minimal set of parameters required to run the adaptor:

Kafka exhaustive logging means that any action with a configuration parameter is logged.

The following levels of logging are used for Kafka:

The table below specifies the most common logging messages for Kafka.

By default, the Kafka TA puts log messages into the FIXEdge log. Execute the following steps to configure the Kafka TA logging into a separate file:

Additional information about logging configuration can be found there:

The schedule settings regulate work of Kafka TA Producer/Consumer. The schedule can be configured as a cron expression or directly tied up to FIXEdge.

Scheduling is represented by the following properties:

Refer to the table in the Configuration parameters section above.

When FIX messages are transferred in raw format (i.e. serialization is not applied), the Kafka TA implies a string containing the tag values has been converted to strings.

The serialized format of communication is fully supported by the Kafka TA. Custom serialization implies the specially designed external code and includes serialization of all Kafka message parts:

When custom serialization is applied and the new message arrives at the particular Kafka topic, this message is received by FIXEdge via the Consumer API. The following DEBUG message is logged in the client log category of the log file:

The message is deserialized via the custom serializer.

In the case of the default serialization, the Kafka TA produces a key using the value of the tag configured in the "KeyTag" parameter. The specified key is passed to the Kafka platform along with the message sent to the particular Kafka topic.

In the case of the custom serialization, the custom plugin produces the key that is passed to the Kafka platform along with the message sent to the particular Kafka topic.

If custom partitioning is configured, the custom plugin produces the partition ID based on the tag values of a FIX message.

When FIXEdge sends a message to a particular Kafka topic and the BL Client is configured to work with XMLData (213), two flows are possible:

The adapter provides information about the following parameters: 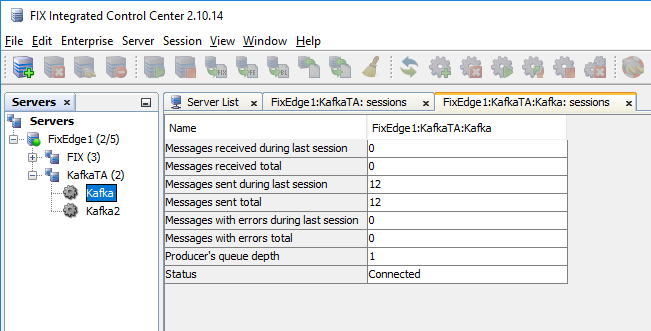 If the adapter fails to start up, there is an issue with a configuration parameter.

To resolve this issue, the configuration parameter specified in the error message must be corrected. Check the log for error messages.

In this example, the path specified to the adapter dll is the incorrect one:

If, during start-up, one session doesn’t load successfully while others are created successfully, there is an issue with a configuration parameter.

To resolve this issue, the configuration parameter specified in the error message must be corrected. Check the log for error messages.

In this example, two sessions ('Kafka' and 'Kafka2') are configured, and one was not created successfully.

In the first session, the wrong parameter, 'protocol', was used instead of the correct parameter, 'security.protocol', and the session was not created.

Adapter not sending or receiving messages

If sessions have been created successfully, but the adapter isn’t sending or receiving messages to/from the Kafka server, this issue has most likely occurred due to a problem with the connection.

If the adapter can’t connect to the Kafka server, it will continue to make connection attempts in given intervals until a reason for the error is established. Until this is done, the TA will not be able to send or receive messages. The default level of logging doesn't explain the reason, you need to enable the deeper level of logging.

To establish what the error is, you must enable the DEBUG logging as follows:

Once this is done, the log will show error messages stating previous connection attempts and the reason for the error. To resolve this issue, correct the configuration issue specified in the error message.

In this example, the wrong server port, 9093 (for SSL connection), is configured instead of the correct one, 9092 (for PLAINTEXT connection).

With DEBUG logging enabled, we can see that the adapter is permanently trying to connect to the server, as well as an error message specifying the configuration issue.

If the adapter is receiving messages from the Kafka server, but not delivering them to target sessions, Business Layer rules have either been improperly configured or have not been specified.

In order to see an error message specifying the issue, DEBUG logging must be enabled.

With DEBUG logging enabled, we can see that message was received, but the message processing failed because no targets were configured in the BL. Business Layer rules for the 'Kafka2' session have not been specified.