Kafka is generally used for two broad classes of applications:

FAJ Kafka adapter is designed to send and receive FIX messages to or from Kafka and connect FIX sources with Kafka. It uses Kafka Producer and Consumer API to communicate with Kafka cluster. 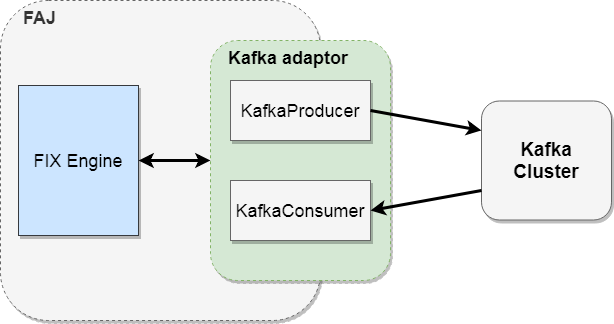 Producer interface is responsible for sending FIX messages to Kafka topics and Consumer - for receiving. Both of them can be instantiated via a factory, which is provided with the adapter:

The minimal kafka-adapter.propeties file should include a list of Kafka adapter clients and link them to corresponding Kafka topics:

Each Kafka adapter client (producer or consumer) can be additionally configured with original Kafka Producer or Consumer configuration options if they are added after the client' prefix:

As a result of these steps, you will be able to see that: