In this document, there is a detailed analysis of the reasons leading to missing/non-processed messages in your solution and troubleshooting recommendations.

The goal that is taken into account is to exclude messages loss or assist the user with message recovery in case of various failures. 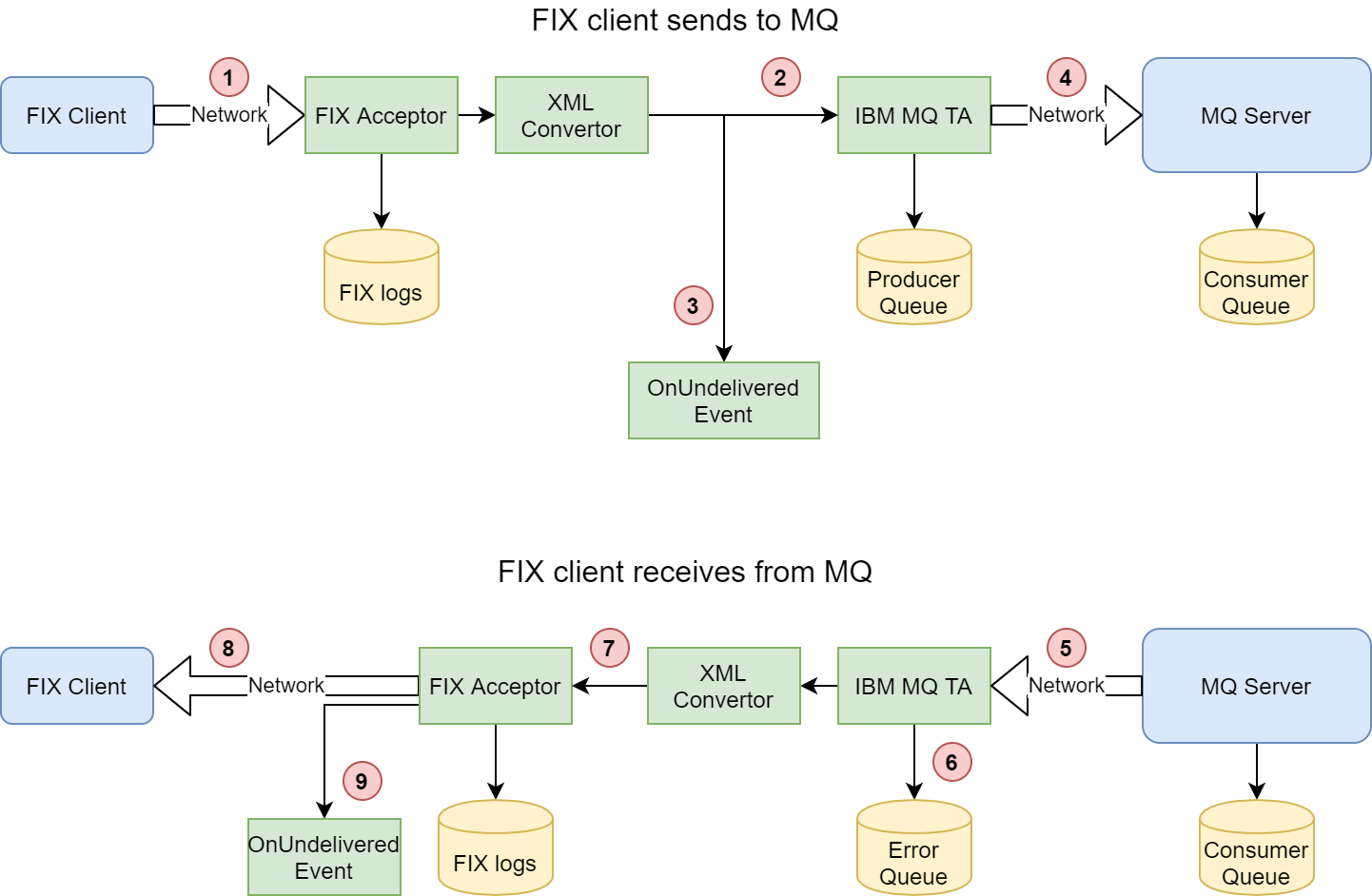 A detailed description of the failures are described below

1. The network between FIX Client (Sender) and FIXEdge is down.

The messages from the client are not delivered to FIXEdge. In this case, the messages are stored on the client's side.
After the reconnection, they recover automatically via standard resend request mechanism if the sender party keeps the sequences.

When counterparty resets or lowers the sequences then the undelivered messages will be lost.

FIXEdge have 2 options to handle these cases:

Users should apply the best strategy for their case.

If FIXEdge failure happens in the middle of routing the sequence number in FIX incoming logs is not updated so messages are considered as not received and will be recovered via FIX Standard resend request mechanisms after the restart. In some conditions, it may lead to duplicates. Missing messages are not expected in these cases.

3. The message doesn't reach MQ due to issues in the Business Rules

The messages can be not delivered to the MQ in some cases. FIXEdge has a mechanism for handling these situations.

FIXEdge detects an event on the Business Logic layer that can be captured by a user. The user can implement the logic for error-handling these kinds of errors.
For example, it is possible to send reject back to the sender or to a special session for manual processing these messages later.

Error events types for the configuration above:

in most cases, these issues are related to the wrong or inefficient configuration.

4. FIXEdge can't push the message to the IBM MQ Server

FIXEdge saves a message to the producer queue with persistent storage before sending it.

In the case of FIXEdge failures or, network failures, or if the connection is dropped all non-delivered messages will remain as undelivered in the storage.  Once the connection will be recovered, FIXEdge tries to finish the delivery and resend messages to IBM MQ Server.

In case if the IBM MQ server (WebSphere) is not available (e.g. stopped) there will be the next error in the logs.

5. FIXEdge can't get from a message from IBM MQ

Since the messages are saved on the IBM MQ server-side, they will be automatically recovered when IBM MQ Server becomes available from the FIXEdge server.

The message can be delivered to an error queue instead of FIX recipient.

MQ TA handles errors when sending messages to BL. If there is an error then the messages are sent to a special error queue so the messages can be processed later, e.g. when the root cause of the problem is resolved.

The only reason for the errors if there is no destination is configured for sending received messages from MQ Server. In most cases, it is related to wrong/invalid Business Logic configuration like there are no specific conditions fit a received message.

MQ Transport Adapter has a mechanism of sending messages as batches within a single transaction. This mechanism is used to detect message loss and recover missing messages.

The batch is considered as delivered if MQ Adapter gets confirmation about the delivery of all of the messages from the batch. Failure of sending even a single message makes the transaction unsuccessful and is resulted in all batch rollback.

If the transaction mechanism is enabled it may lead to message duplicates after recovery in some cases. In order to reduce the number of duplicates, it is recommended to use a transaction batch with a small size.

However, disabling the transaction mechanism may lead to missing messages in case of failures during receiving messages from MQ.

It is designed to increase the performance of the MQ TA.

MQ Client version 7 doesn't have the full support of batch sending so sending performance is not increased.

Additional information about persisting state of transactions can be found: Transactions in MQ

The messages for the error queue can be re-processed using dmpmqmsg tool. The tool can move messages across queues and should run on the server with IBM WebSphere.

It is recommended to use different Error Queues per session for simplifying troubleshooting of the issues. If messages are related to a session it is easier to create filtering rules.

The queue per MQ session is specified with TransportLayer.MQAdaptor.Session.<N>.ErrorQueue parameter

If there was a FIXEdge failure when messages are in transit from MQ to FIX there is a chance to lose the messages. E.g. when FIXEdge marked the message as received from MQ but the message is not sent to the FIX recipient.

All such cases should be considered independently

8. The network between FIX Client (Recipient) and FIXEdge is down or the session is offline

The messages from the FIXEdge are not delivered to the FIX Client if there are network issues. After the reconnection, the messages are recovered automatically via a standard resend request mechanism.

By default, the messages are stored on the FIXEdge side before sending it.

The messages can be lost when FIXEdge reset sequences by the schedule. All undelivered messages will be lost

If configuring proper schedule is not flexible enough and it is required to deliver missing messages the next day after sequence reset, it is recommended using the Managed Queue feature implementing a store-and-forward workflow.

The Managed Queue feature was introduced in FIXEdge 6.9.0

9. OnUndeliveredMessageEvent on sending to FIX message.

The message can be not delivered to the FIX Client in some cases.

It happens when FIXEdge tries to send a message from MQ but the session is offline and property for rejection fix messages in case of disconnection is set:

It is not recommended to use logic for sending messages in the same session again if the first attempt has failed and the OnUndeliveredMessageEvent event is called.